Every brand has to start somewhere. I started with these core t-shirts.

Check out the establishment of The Good Child, as captured by Margie Woods Brown Photography on the streets of Dallas, TX. Click the above image to see The Beginning.

All of the shirts featured are currently on sale at http://shop.officialgoodchild.com.

The Good Child Series One styles are now available for purchase at a gangster-low price of only $9.99. The price drop is a big Thank You to the dozens of supporters I have gained since releasing the series (in November 2010). With every e-mail, shout-out, mention, Like, interview, and follow — you have all contributed to the success of The Good Child, but also to my happiness.

The Spring/Summer 2011 series has been doing well and I can’t wait to release more exclusives and the next series. Thank you all for the positive feedback and, yes, the constructive criticism. Here’s to you!

You can purchase Series One, here, or at http://shop.officialgoodchild.com. Remember, sizes and quantities are super limited! Once a size/style is sold out, it never returns to the shelf.

Here it is, The Good Child Series One SALE. The new spring/summer line will be out soon enough and now you can grab any tee from the first series for ten dollars less than before. 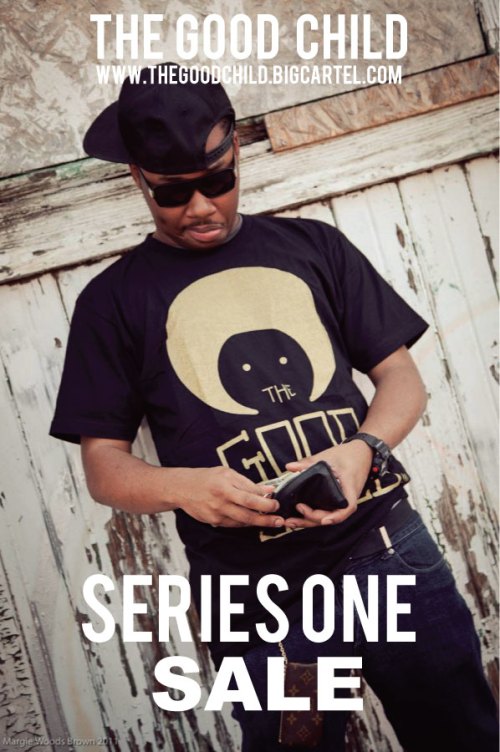 What will you do with the ten dollars you save? If I were you, I’d save it to put toward the new tank in the spring/summer line (my favorite), but then again I might also spend it on lunch, gas, or a Reggie Watts album.

Remember, every t-shirt comes in a super limited run (30 at most) and most size Mediums are sold out already! NO design will ever be reproduced. Visit http://thegoodchild.bigcartel.com to get yours!

The Good Child Series One Update

All of you have been waiting so patiently for The Good Child Series One release party news!

Last week, I revealed all of the styles from Series One via the online shop for you. Since the reveal, I’ve had a lot of great feedback and people trying to pre-order shirts! (Note: the only item available for pre-order is The Good Child x GoodWoodNYC piece). In the mean time, I have been talking with two of my favorite Dallas shops – Centre and We Are 1976 – about doing a small release party with either of them. The good news? Looks like I might be doing a short feature video with Centre and I am officially joining the ranks of some other Dallas artists for a special event at We Are 1976 come February. The bad news? There’s not enough time this month to squeeze in the release party at either shops.

But, wait…there’s more good news! I don’t want to keep you waiting any longer! I am releasing Series One THIS TUESDAY, 18.JAN.11, online only. Also, due to the unfortunate event of, well, no release party event, I have decided to give your pocket$ a break.  For the first 24 hours of the Series One release, I am putting the set on a 25% discount (Note: does not include The Good Child x GoodWoodNYC piece). You can also look for the original The Good Child t-shirt at half of it’s original price –  $14.99 – and it will remain at that price regardless of the 24 hour Series One sale.

I’m admittedly bummed about not being able to throw you guys a literal release party this month, but what’s happening in February at We Are 1976 is going to be awesome! The group event is still being smoothed out, but We Are 1976 will have all the juicy details for you soon.

Again, Series One will release this Tuesday, 18.JAN.11, at midnight (that’s technically the middle of the night on Monday) and all t-shirts in Series One will be on a 24 hour sale!

Tagged series one, The Good Chile

The Good Child Series One REVEALED!

Today, the first part of The Good Child Series One became available. The Good Child exclusive GoodWoodNYC necklace was released for pre-orders only. Once ordered, the necklace will be shipped by 30.JAN.11. I’m super stoked about this product! Only 25will be produced!

Also happening before the end of the month will be The Good Child Series One t-shirt RELEASE PARTY. That’s right. I’m working hard behind the scenes over here to make this party happen. In talking with some of my favorite shops and friends in Dallas, it looks like I’ll be teaming up with some of them in the very near future, but not soon enough for YOU. So, I’m still going to make this release party a reality – just for you – even if it’s not in a commercial area.

The release party will include free beverages and foodstuffs, and there will be music to keep everything from getting too awkward. The four new styles will be for sale (cash or debit/credit/PayPal only) and I will have on hand one of The Good Child x GoodWoodNYC necklaces for your viewing pleasure (you can still place a pre-order online now and/or before 22.JAN.11). Remember, each t-shirt style comes in a run ofonly 30 and will never be reproduced!

THANK YOU for your support in these first three months of the brand. Just for you, tonight I am changing up the images on the online shop to be 100% viewable! Now, you can sit there and bite your fingernails over which t-shirt you’re going to snag. Stay tuned here, here, here, here, and here for detailed news on the release party!